Review Time! Angelfire written by Courtney Alison Moulton is a 2011 YA Debut, that I've been dying to read! I read it a few weeks ago but I'm lazy and slack and haven't bothered to review it til now :P I would like to thank Shannon @ Stalking in Bookshelves for sending me a lovely hard covered copy for April RAK! Oh! And counting this towards my Bucket List Challenge. 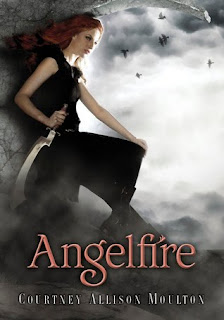 (Goodreads) When seventeen-year-old Ellie starts seeing reapers - monstrous creatures who devour humans and send their souls to Hell - she finds herself on the front lines of a supernatural war between archangels and the Fallen and faced with the possible destruction of her soul.


A mysterious boy named Will reveals she is the reincarnation of an ancient warrior, the only one capable of wielding swords of angelfire to fight the reapers, and he is an immortal sworn to protect her in battle. Now that Ellie's powers have been awakened, a powerful reaper called Bastian has come forward to challenge her. He has employed a fierce assassin to eliminate her - an assassin who has already killed her once.


While balancing her dwindling social life and reaper-hunting duties, she and Will discover Bastian is searching for a dormant creature believed to be a true soul reaper. Bastian plans to use this weapon to ignite the End of Days and to destroy Ellie's soul, ending her rebirth cycle forever. Now, she must face an army of Bastian's most frightening reapers, prevent the soul reaper from consuming her soul, and uncover the secrets of her past lives - including truths that may be too frightening to remember.

The Short Story ? - A fantastic debut! Fast-paced and action-packed, one of the most adventurous novels I have read! Brilliant characters, gripping plot and beautifully written. Angelfire is a paranormal debut you wouldn't want to miss! Looking for a summer read? You found one!

The Long Story ? - I was absolutely thrilled to find this book waiting for me on my doorstep, it's one of the debuts that I've had my eyes on for a long time. I initially heard about this novel from Kristi @ The Story Siren who plans the 2011 Debut Author challenge. Thanks again to Shannon for the RAK ;)

The plot would probably be the highlight for me. It was a rather slow start but for the novel to flow well and for readers to understand what's going on, it was necessary. I sometimes feel that paranormals are the hardest books to write because not only do you have to tell a story but you have to explain the story behind the story as well. In this case, the story behind the story was told at the start. So after we all warmed up to the idea of Angels and Demons, we're pretty much taken on a roller coaster ride. Non.Stop.Action. I was literally sitting on the edge of my seat! Lot's of action, lot's of fighting and lots of romance! You'll never get bored with this one!

The characterisation very well-developed. Our protagonist, Ellie, was badass enough to be my sister! On a emotional level I can really understand some of the stress and pain Ellie goes through as she decides between wanting a normal life and saving the world from evil, she's a strong heroine that I've grown to admire. Will, her smexy guardian is exactly that, sexy as hell! He's got the protective streak down pact as well as the good looks, hopefully we get to see more of Ellie and Will's blossoming romance in the sequel ( Wings of the Wicked)

Overall, Angelfire is an extraordinary debut that I would strongly recommend to lovers of action and paranormal. Even if you don't normally read paranormal, I encourage to check this one out! I prefer to read paranormal romance that's more romance than paranormal but this action-save the world stuff is really great too! Kick-ass plot, fantastic characters and beautifully written!

Rating - 4/5 ( I would have like to see a little more romance, personal thing so don't let it stop you from reading this awesome debut!)