Review Time! Where She Went is the sequel/companion novel to Internationally Bestselling Debut, If I Stay by Gayle Forman. I'm under the impression that you can read this novel as a stand-alone since they're told from different characters and aren't really connected. Thanks to Random House for the review copy! 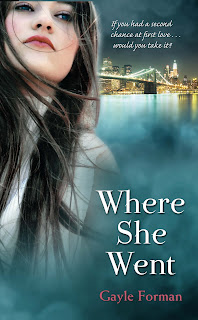 
Now living on opposite coasts, Mia is Juilliard's rising star and Adam is LA tabloid fodder, thanks to his new rock star status and celebrity girlfriend. When Adam gets stuck in New York by himself, chance brings the couple together again, for one last night. As they explore the city that has become Mia's home, Adam and Mia revisit the past and open their hearts to the future–and each other.

Told from Adam's point of view in the spare, lyrical prose that defined If I Stay, Where She Went explores the devastation of grief, the promise of new hope, and the flame of rekindled romance.


The Short Story ? - A deeply moving love story that stole my breath away! The long awaited sequel to If I Stay is one of the best, most heart-felt stories I have read this year! A novel about love and loss and the beauty of music. Beautifully written, enriched characters and a love story so heart-breakingly beautiful, it goes without being said that Where She Went is a winner!

The Long Story ? - Quite frankly, I didn't like If I Stay very much. Firstly it was a dark contemporary and secondly some of the content was quite graphic in the blood and gore kind of way. I wasn't so sure that I was going to read Where She Went until I found out that it was set three years after If I Stay and told from Adam's perspective. Male lead + Mystery break up = Good Book.

I cried my heart out when I read this book. It's was just that moving, I'm usually annoyed with lyrical writing and books about self-pity protagonist but this was different. Adam deserved his own story, I wanted to read about his grief, how hard it was for him to cope without Mia, what their break up had done to him. It was an captivating experience, dealing with someone else's pain. Gayle's writing is absolutely beautiful, I admire her ability to write so well from a male's perspective but as well has her choice of vocabulary and figurative speech.

The plot was short and long, short because the bulk of the novel was written about events that happened during a 24 hour period. Long because it was rather slow moving - in a good way though, Gayle's really taken everything into perspective giving readers a clear view of everything. Just like If I Stay, the novel alternated between snippets of the present and the past. What I really liked about the novel is that every event that happened held a little it of significance. Unlike some novels that where some events happened just for the sake of filling up pages, every page meant something, it was detailed and every words, every place, every event meant something to either Mia or Adam.

The same characters we were introduced to in If I Stay are brought into Where She Went as well. However the novel is pretty much based around Adam and Mia so that the other characters hold really minor significances. We don't see so much character development as it's more like a deeper insight into Adam, our main characters who was only briefly introduced as Mia's love interest in If I Stay. Quite frankly I didn't pay so much attention to him in If I I Stay but now I wish I had because I'm totally head over heels in love with this man! Luckily I have my own copy of If I Stay so I can!

Bottom line, Where She Went is a deeply moving novel that every romance should read! I don't care whether you skip If I Stay or read them one after another but I strongly encourage you to pick up Where She Went. Beautifully written, achingly heart moving, a monster tear-jerker and one of the greatest love stories ever. Bookie approves!