Review Time! Starcrossed by Josephine Angelini is an 2011 YA Debut, I've been dying to read this books and I'm so honoured to receive an ARC from Pan Mac, you guys are absolutely amazing! Absolutely LOVE the cover ( first thing I noticed about the book, don't judge me, I judge the book :P). Anyway, let's get started shall we? 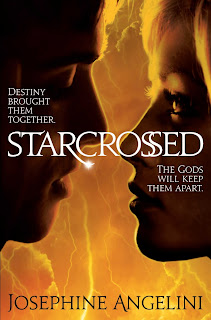 (Goodreads) Helen Hamilton has spent her entire sixteen years trying to hide how different she is—no easy task on an island as small and sheltered as Nantucket. And it's getting harder. Nightmares of a desperate desert journey have Helen waking parched, only to find her sheets damaged by dirt and dust. At school she's haunted by hallucinations of three women weeping tears of blood . . . and when Helen first crosses paths with Lucas Delos, she has no way of knowing they're destined to play the leading roles in a tragedy the Fates insist on repeating throughout history.


As Helen unlocks the secrets of her ancestry, she realizes that some myths are more than just legend. But even demigod powers might not be enough to defy the forces that are both drawing her and Lucas together—and trying to tear them apart.

The Short Story ? - Greek Mythology is the bomb! A passionate romance, an ancient curse, a plot full of action...are you bought yet? Should I go on? Fantastic characterisation, beautifully written and some devastatingly hot guys ( Hector's mine, so back off, find your own hunk). A stunner of a Debut! Josephine, we're glad to have you onboard ( yes, today the YA community is a cruise ship)

The Long Story ? - I honestly didn't know what to expect with this one. I was dying to read it because of the cover but I didn't actually know what it was about. The blurb said Percy Jackson ( brilliant) for girls and that's totally not true!!! It's so much more interesting ( in the girl drama department), the storyline is more complex and it's clearly written for an older crowd, bottom line - Starcrossed is a great love story that gives forbidden a whole new meaning!

The one thing I can't stop thinking ( and dreaming about, not even kidding) is the characters. Some of the best characters EVER, Helen our very own supernatural protagonist is one hell of a badass. We see alot of character development in her throughout the length of the books. She's portrayed as a shy, head down, background blending, girl who doesn't really belong anywhere because she's "supernatural" ( I'm really taking this Non-Spoiler thing to the heart guys). After she meets Lucas, she's learnt to appreciate who she is and works up the courage she never knew she had and by the end of the novel she's really an independent girl I've grown to like and admire.

The romance is another great thing about this debut. The whole novel is pretty much based around this forbidden romance between Lucas and Helen because of this ancient curse between these "people". You can feel the sizzling passion between the two and Josephine you write fantastic "kissing scenes" ( and I actually mean kissing scenes when I said that). Along with the main love story there's also a little bit of love going around with some of the minor characters. All the characters are unbelievably good-looking ( *fist pump*) and I'm totally in love with Hector!

The plot was great as well! It's a little slow to warm-up to and Before-Lucas Helen did annoy me a little, she could have been so much more....However, enter Delos Family and bam! Fast-paced non-stop action, twist and turn and more secrets then ...me? Addictive, dark and gripping story that will hold onto you and never let you go! Definitely a OSR ( One Sitting Read) although it's about 500 pages long so you might have to wait til the weekend to read this or you'll find yourself in a book hangover!

Starcrossed is one debut you don't want to miss! Fast-paced plot, forbidden romance and some of the best characterisation I've read lately. Lover of all things Greek or just looking for the perfect read? Do yourself a favour and stop hunting down your next read since Bookie's found it for you!

Can't wait for the next one!