Review Time! Dark Heart Forever is the first novel in the series written by Lee Monroe, the second novel Dark Heart rising was released this month or early next month depending on where in the world you are! This one came for review from Hachette last year but I haven't had the chance to review it til now! Thanks for the copy! 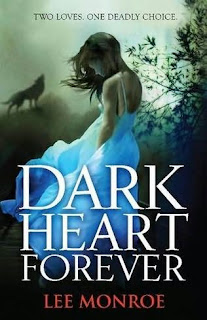 (Goodreads) Jane Jonas is nearing her 16th birthday and troubled by unsettling recurring dreams where the same mysterious boy her age comes to her, telling Jane that they are each other's destiny. Her mother is increasingly anxious about Jane's disruptive sleepwalking episodes, but for Jane her dream world and reality are about to collide ...When she develops a friendship with an enigmatic stranger in town, the blond, uber-cool Evan, it's exciting, it's new, and Jane wants him more than she's ever wanted anybody - until her mystery dream boy gets in the way. Now Jane is caught between two worlds: one familiar, but tinged with romance and excitement; the other dark and dangerous, where angels, werewolves, and an irresistible stranger are trying to seduce her ...

The Short Story ? - Dark and captivating paranormal romance that's highly original and exciting! A brand new love story overlapped with an haunting paranormal landscape. An admirable heroine and two handsome boys equals one of the most interesting love triangles I've read yet! Original, exciting and full of the unpredictable!

The Long Story ? - The first thing that caught my eye about this book was the cover...how gorgeous is it? It fits with the novel which is more than I can say about other novels I have read that yes, have a beautiful cover and yes, are fantastic but they have nothing to do with each other. I went and goodreads the novel and there were lots of mixed reviews about it. It's one of those novels that you'll really like or you'll be extremely disappointed with.

I really enjoyed it. There were parts that I wish that I could change but overall it was a great read! The highlight for me would be the romance. It was an original love triangle. I usually stay away from love triangles because a) they're getting old b) I like happy endings for EVERYONE but this was a pretty one - sided love triangle. It's a romance where you won't feel sorry for the underdog because of this "twist". It's a romance that will leave you thinking ' wow, that's not what I expected....'

In turn, the romance plays a significant part in the plot. The novel is quite slow moving and most of the action is packed into the last third of the book. It's a novel that immediately introduces the paranormal touch so we don't have to sit through another cliched Twilight human/non-human forbidden-I'm-not-good-for-you-but-I-can't-stay-away beginning. It's highly original and while most of it is set on Earth ( which part is still a mystery, America or UK), Lee Monroe has created a new world where some of the novel is set.

Last but not least, the characterisation is really good! Jane ( don't judge her by her name!) is a strong, admirable heroine who is completely different from any other protagonist I have read. She's been through some bullying issues but was still strong and ready to defend her family. Lucas is complete sweetie, cute, compassionate and totally into Jane even though he won't admit it! Evan on the other hand, is a hot Aussie ready to steal away Jane's heart! I struggled to chose between the two until the very end when the choice became very obvious!

Overall, Dark Heart Forever is an enjoyable romance that will leave you wanting for more! Great characters, a plot full of twist and secrets and a romance worth remembering! Bookie recommends Dark Heart Forever to everyone looking for a nice summer ( or winter!) read!