Review Time! The Iron Witch by Karen Mahoney is a 2011 YA Debut! I was SO excited to read this book, one of most anticipated debuts of the year! Thank-you to Random House for the review copy ( thanks L!) Now, onto the review! 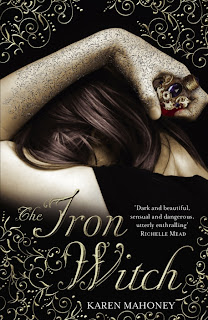 (Goodreads) Freak. That's what her classmates call seventeen-year-old Donna Underwood. When she was seven, a horrific fey attack killed her father and drove her mother mad. Donna's own nearly fatal injuries from the assault were fixed by magic—the iron tattoos branding her hands and arms. The child of alchemists, Donna feels cursed by the magical heritage that destroyed her parents and any chance she had for a normal life. The only thing that keeps her sane and grounded is her relationship with her best friend, Navin Sharma.

When the darkest outcasts of Faerie—the vicious wood elves—abduct Navin, Donna finally has to accept her role in the centuries old war between the humans and the fey. Assisted by Xan, a gorgeous half-fey dropout with secrets of his own, Donna races to save her friend—even if it means betraying everything her parents and the alchemist community fought to the death to protect.


The Short Story ? - It's definitely one tough cookie to review! Karen's written a wonderful novel that entwines reality with threads of magic. The Iron Witch is an original novel with a new twist on Fey and alchemy! Cleverly crafted and intriguing, looking for a new fantasy to read? The Iron Witch comes with a tick of approval from the Bookie!

The Long Story ? - I've read alot of bad reviews about this book and while I get where these reviewers are coming from, I simply think it's a misinterpretation, let me justify. If I had to describe this book in one word it would be -teaser. The Iron Witch is a teaser, giving us little clues about what's going to happen later on in the series. Gives us a little taste of action then quickly ends the book to keep us in suspense, scratches the surface on both the storyline and the characters but never enough that we fully understand what's going on.

While many reviewers think this is bad planning on the author, I believe this is the intended effect and really, I thought this book was pretty book. While the writing style was a little hard to get comfortable with at the start, I slowly warmed up to the book. This book is written for the YA audience, but the language and style used would be aimed at a higher audience. I would recommend this book to readers over the age of sixteen because of the rich vocabulary as well as the more formal style.

The plot is an original take on Fey as well as magic. Karen's brought in a entirely different take on magic as well as our winged friends. For one, sorry to break it to you but the fey aren't all that pretty, however a certain faerie/human hybrid or half-fey has stolen my heart ( and he is pretty)! Fast-paced and adventurous, it's a book that keeps readers at the edge of their seat. The cliff-hanger ending and questions without answers hint that the second book  will be tell-all for readers. While both the fey and the magic is only briefly explained it brings us closer to the protagonist Donna, who is suffering the same ignorance as she struggles to separate what and who to believe about both the fey and the Order.

The highlight of the novel for me however would be the characterisation. While reader grasped the basics about both Donna and Alex ( the half fey cutie I was talking about) alot of information about their background and history is still hidden from readers. Both have suffered traumatising experiences that has left them vulnerable and seeking understanding from others which they find in each other. Personally, I thought that was the perfect start to a romance between the two. Two outsiders who seek companionship in each other and as they discover more about each other, we as readers also learn more about them. there's also the hint of a possible love triangle which in any other case I would disapprove because I can't choose between the two btu in this case, I'm Team Alex so it's alright :)

Overall, The Iron Witch is an intriguing debut that has left me wanting for more. I'm in love with all the characters and feel connected to them on some level or another, each has their own flaws (physical and emotional) and for me that's what makes them more realistic, no one's perfect, not even the good-looking ones! The Iron Witch, is original, dark and fast-paced! I've taken the bait, have you?