Debut of the Month - All About Carole Estby Dagg

My grandmother predicted I would grow up to be a writer. Sixty-seven years later—after careers as a CPA, children’s librarian, and assistant library director—I’m finally fulfilling my grandmother’s prophecy with my first novel. Although I spend most of my time writing and reading, I’ve had some real-life adventures too. I have tip-toed through King Tut’s tomb, sand-boarded the dunes of Western Australia, and ridden a donkey up the cliffs of Santorini. I was born in Missouri, but after sixteen moves in my first sixteen years, I settled in Washington State. I am married with two children, two grandsons, and a bossy cat. I write at my home in Everett and a converted woodshed on San Juan Island.

Dream Debutante Dress - "This dress is similar to the one I made to attend the Jane Austen Society’s ball. I used this picture instead of one with me inside the dress because the mannequin looks better in it than I did. " 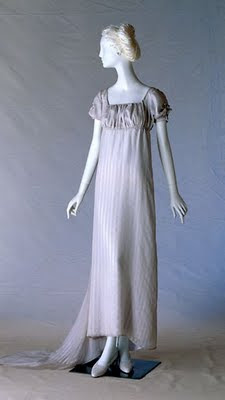 I keep my sanity with post-its and lists, so here’s a list of random facts:

- I saw Great-aunt Clara, the narrator for The Year We Were Famous, for the last time in 1950 when a nun broke the hospital rule about no children on patient floors.

- My cat, Billiken (named for the goo- luck symbol of the 1909 Alaska-Yukon Exposition), keeps me on a rigorous schedule, including getting his breakfast at 6 a.m. and my settling down to work by 8 a.m.

- Until I had braces I could spit watermelon seeds between my two front teeth.

- I attended four high schools—one of them twice—in two years.

- My hand-woven plaid blanket won a Best of Show in the Snohomish County Fair.

- My husband does not read books by women authors, so he has never read mine.

- My first rejection on The Year We Were Famous (then titled Clara Estby, Pedestrian) was in 1995. My ultimate publisher, Clarion, had rejected it twice before it was accepted in 2007.


- I am working on a sequel to The Year We Were Famous and a book set in Alaska; I also have drawers full of notes for three other historical fiction projects.

Carole, you are SO not boring! I enjoyed this post ALOT! For all those aspiring authors out there, you can see just how long it takes to get into the business, 16 years is a long time and it's great Carole, that you didn't give up! I don't want to spoil the postfor tomorrow but you guys don't want to miss it, the insider's scoop is really fantatsic, so so interesting, I love the book already! PS- Carole IS giving away a copy ;)