I'm so excited because today I have the honour of kicking off the Australian blog tour for Fiona Paul's eagerly anticipated sequel to her debut - Venom! Belladonna is coming this July ( this month!!!) from HarperCollins Australia! Super excited for this book because I absolutely adored Venom which I read back in January ( Review - HERE )! I have to pleasure of kicking of the tour with an Q and A with Fiona Paul! So excited, let's hear what she has to say about Belladonna!


Quickies -
Skittles or M&Ms? Both!
Black or white? Black
Coffee or Tea? Coffee. OMG, so much coffee.
Print copies or e-books? Print copies
Dog-ear or Bookmark? Bookmark for where I left off reading, dog-ear for those unforgettable passages I want to refer to later
Cats or Dogs? Kittehs! I love dogs too, but I live in a tiny apartment so...
Reading or Writing? Is this a trick question?
Vampires or werewolves? Vampires
Favourite Harry Potter Novel? I will refer you to this image of my purse - http://twitter.yfrog.com/oen8uatj?sa=0
Have you watched Vampire Diaries? Sadly, no. But one of my friends is forever telling me I need to, so it’s on my list.
Book you most want to see turned into a movie? Other than my books, you mean? Sarah Dessen’s Along for the Ride
Favourite day of the week? Whatever day it happens to be when I turn in something for a deadline
What's your party trick? Taking over the sound system and forcing everyone to listen to a lot of 90s alternative music
Your perfect breakfast consists of – Coffee, OMG, so much coffee

What do you think of Matt Bomer? He has nice hair, but when he dances next to Channing Tatum he kind of fades into the background.

2) What can readers except in this upcoming ( and totally exciting sequel)?

I keep having to remind myself we’re talking about Belladonna since I’ve been finished with Starling for several months now. Let’s see... readers can expect arrests, executions, a journey to Florence, more Falco, more Luca, more info about the Order and the Book of the Eternal Rose, and a climax scene that may or may not claim the life of an important character.

YA books are my favourite books to read, and the best writing advice--always and forever--is to write the book you want to read. Adult books (and I don’t mean to generalize, I am just stating my perspective) seem to slot neatly into genres—mystery, romance, horror, literary—whereas YA books often encompasses several genres in one. Side note: I love that this file auto-corrected my American spelling of favourite to make it Aussie-approved. Tee hee, it did it again! (It’s the little things that make me smile).


Falco, because he is sarcastic and tells it like it is.


5) Is there a story behind the names of characters?

I have two YA contemporaries—a romantic comedy and a murder mystery--coming out under my own name starting in 2014. Check out THE ART OF LAINEY on Goodreads: HERE

7) Who would play the characters in a movie adaption?
Some of these people are technically too old for these parts, but whatever, Hollywood loves to cast 30-year-olds as teens, right? I am going to select the following for my Eternal Rose dream-team:

One of the scenes in Belladonna is inspired by this USA Today article about the unearthing of a 16th century ‘vampire’ woman: HERE

Bio: Fiona Paul is a writer and registered nurse from St. Louis, MO.

(I prefer the short and sweet bio since there's a lot of other stuff to read that's more relevant than my love of coffee or desire to shark dive). 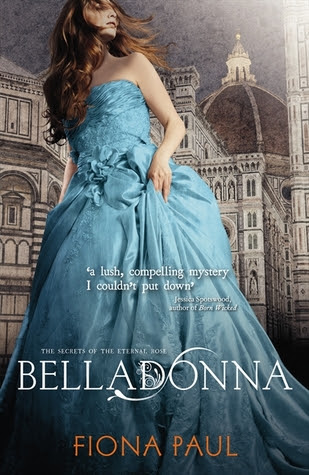 Cassandra Caravello is trying to forget Falco, the wild artist who ran off with her heart, as she grows closer to her strong, steady fiancé, Luca. But Luca seems to have his own secrets. When he′s arrested by soldiers in the middle of the night, Cass′s life is once again thrown into chaos. She must save Luca, and that means finding the Book of the Eternal Rose -- the only evidence that will prove he is innocent.

So begins her journey to Florence, a city haunted by whispers of corruption, secret soirees and clandestine meetings of the Order of the Eternal Rose. And home to Falco, who′s working for the Order′s eerily stunning leader, the Belladonna herself.

Can Cass trust her heart to lead her to the truth this time?

Nothing is as it seems in this seductive thriller, where the truth may be the deadliest poison of all..