Debut of the Month - Mindy Raf ( The Symptoms of My Insanity) 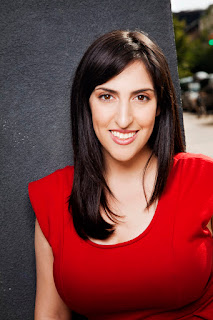 
Mindy Raf is a writer, comedy performer, and musician based in Brooklyn, NY. She is a graduate of the University of Michigan, and grew up in a Detroit suburb right around here (visualize someone pointing to the inner part of their thumb). She has written for VH1, CollegeHumor.com, was a contributor to the “My Parents Were Awesome” anthology. She has been invited to perform at the Women in Comedy Festival, SketchFestNYC, NY Funny Songs Fest, and the Bridgetown Comedy Festival, where she was named a “stellar surprise” by The Portland Mercury.

The Witches is one of my favorite books, and I absolutely love the movie. Plus, who doesn’t need the perfect black cocktail dress with a PURPLE LINED CAPE! A classy, versatile, sexy dress (that’s also a witch disguise), that’s how I want to debut!

Some stream of consciousness facts:

- I perform stand-up comedy, storytelling and musical comedy when I’m not writing.

- I live in Brooklyn.

- I grew up in Michigan. (A suburb outside Detroit)
No, not near 8 mile.

Okay, well not that far from 8 mile.

- Okay, fine, Eminem and I used to rap battle all the time. I’d drive in from the suburbs and we’d freestyle. They just cut that part out of the movie.

- One of these facts so far is a lie.

- I grew up with five cats all named after food: Mocha, Fudge, Cookie, Sugar, Oreo.

- One of them (Oreo) we kind of stole thinking he was a stray, but he actually belonged to our neighbour.

- The neighbor ended up giving it to us because he liked my mom so much. (His real name -and what we called him after- was Dudley)

- Someone just sent me an e-mail asking me if my boobs growing up were the same size as my protagonist’s Izzy. Wow.

- The answer is yes. Kind of. In the book Izzy is a 34 DD. That was my size in 8th grade, and until about two years ago when I went to one of those fancy specialty stores for a fitting (thank you, Oprah). I was resized from the 34 DD to a 32 G. Wha? Yeah.


Bookie's Note: Okay so technically Mindy is an April Debutante but I was busy and she was busy and it just ending in June okay? JUST GO WITH IT!!! Mindy, your thoughts were so funny, I thought it deserved to be in different colours. And definitely not too much. It was funny, like really funny, like I'm still cracking up about Oreo funny! Everyone agree? Yeah, yeah? YEAH?

Anyhow, remember to come back tomorrow to see the second half of Mindy's feature and for a giveaway! :)