Review Time! So I kinda fell off the blogging wagon again this week - there is just so much going on which my preparation for Germany and the term finishing up etc etc! However I do have a review for you today! The Madness Underneath is the sequel to Maureen Johnson's The Name of the Star - I didn't even know there was going to be sequel but HERE IT IS! You can purchase The Madness Underneath from Fishpond | The Book Depository | The Nile | Bookworld. Thanks to HarperCollins for the review copy! 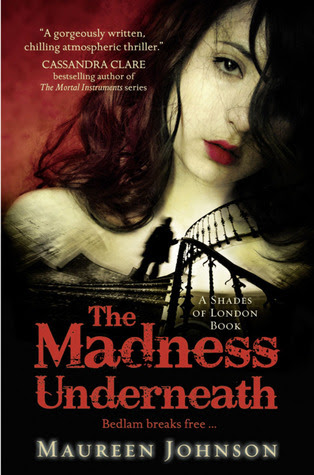 (Goodreads) After her near-fatal run-in with the Jack the Ripper copycat, Rory Devereaux has been living in Bristol under the close watch of her parents. So when her therapist suddenly suggests she return to Wexford, Rory jumps at the chance to get back to her friends. But Rory’s brush with the Ripper touched her more than she thought possible: she’s become a human terminus, with the power to eliminate ghosts on contact. She soon finds out that the Shades—the city’s secret ghost-fighting police—are responsible for her return. The Ripper may be gone, but now there is a string of new inexplicable deaths threatening London. Rory has evidence that the deaths are no coincidence. Something much more sinister is going on, and now she must convince the squad to listen to her before it’s too late.


The Short Story? - The Madness Underneath started off as an average read for me -  after a stunning series debut, I almost felt like this sequel fell flat however as I progressively began to read, I started to enjoy the book more and more. It's a slower pace but nevertheless worth your time! Great plot, incredible ending and a great protagonist. Overall a very solid read, I'll definitely be continuing with the series!

The Long Story? - The Madness Underneath was a complete surprise to me. Not a bad surprise but a surprise nevertheless. When I heard Johnson was writing a sequel to The Name of the Star, my thoughts automatically turned to perhaps a new ghost psychopath on the loose or maybe the ripper returns but that's definitely not what The Madness Underneath is about. The plot follows our protagonist Rory as she struggles to find balance in her life again after the events set in the first novel. The plot lacks the intensity and the edge-of-your-seat action that was present in the first book, it's a more subdued plot. This isn't necessarily a bad thing but I love my fast-paced plots so I found myself a little bored in the middle of the novel. However to be blatantly honest, no matter how average the first half of the novel was, the ending totally made it worth the read. The ending was AMAZING. Dramatic, heart-breaking, romantic, tense and an absolute cliff-hanger - I must applaud Johnson for that spectacular finale!

The characterisation was good although I did have some minor issues regarding the development of secondary characters. I didn't feel the characters were being further developed. A lot of the characters are still a mystery to me and that makes it really difficult for me to understand their actions and connect with them. It's also the second book in the series so I sort of expected to finish the book with everyone figured out. That said the characterisation was still really fantastic! One of my favourite things about Johnson's writing is that all her characters are so unique and out of the norm. They're not all good-looking, unrealistic people! Theses are REAL characters. Our protagonist Rory, was a little weird BUT that's what I liked about her. Her personality was very out there and she loved to talk ( just like me!). Rory wasn't always likeable and some of her decisions were definitely a no-no but overall I felt like I could connect with her and that's all that mattered!

I always find sequels harder to review because I try to keep my reviews spoiler-free! The Madness Underneath was nothing like what I expected it to be but that didn't make it any less enjoyable! Johnson has a refreshingly different prose and her novels are always very well written. There were minor flaws in the characterisation and the plot however nothing could have made the novel less enjoyable! A killer ending (haha punz!), great protagonist and beautifully written, The Madness Underneath is definitely worth the read! It's an upward climb from here, eagerly anticipating the next book!