Review Time! So you probably noticed the lack of posts lately and I'm SO sorry but I've had midterms and it's all been really stressful! Things are settling down a little so today I have a review of The Goddess Inheritance by Aimee Carter, the final book in the Goddess Test trilogy! I've followed this series from the start and it's brilliant, you can purchase a copy of The Goddess Test from The Nile | The Book Depository | Bookworld | Fishpond. Thanks to HarlequinTeen for the review copy! 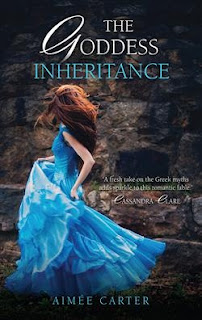 (Goodreads) During nine months of captivity, Kate Winters has survived a jealous goddess, a vengeful Titan and a pregnancy she never asked for. Now the Queen of the Gods wants her unborn child, and Kate can't stop her — until Cronus offers a deal.

In exchange for her loyalty and devotion, the King of the Titans will spare humanity and let Kate keep her child. Yet even if Kate agrees, he'll destroy Henry, her mother and the rest of council. And if she refuses, Cronus will tear the world apart until every last god and mortal is dead.

With the fate of everyone she loves resting on her shoulders, Kate must do the impossible: find a way to defeat the most powerful being in existence, even if it costs her everything.

Even if it costs her eternity…


The Short Story? - What a fantastic end to a trilogy! I'm sad to see these characters go but I'm glad that I've been on this epic journey with them. The Goddess Inheritance was definitely a very strong addition to the trilogy. There was action, romance, drama and all that good stuff! It was a roller coaster ride of a novel, everything tied up nicely and I liked how it was a little bit bittersweet. Some of the writing was a little patchy but in the grand scheme of things, I really thought The Goddess Inheritance very well done!

The Long Story? - I'm very happy with the way this trilogy ended, it wasn't perfect but plot wise, this was definitely a worthy ending to a brilliant trilogy. I'm a huge fan of greek mythology and the premise of the series is fantastic. I'm especially taken by the war between the olympians and the titans that Carter has incorporated into the plot of The Goddess Inheritance. It's jam-packed with action, it's edgy and it's fast-paced. The problem with such an ambitious plot is that it can get a little choppy which, unfortunately, it did in parts. Some parts were very rushed and confusing and that made it uncomfortable to read. This choppy writing style is present throughout the trilogy but once you get used to it, it's really not a huge problem and I honestly think nothing could make this plot less appealing. I loved everything about it, the romance, the action, the tension, the loss and the sacrifice, definitely one I would recommend to YA readers of paranormal romance!

Since it is a trilogy, I have grown close to the characters over the course of the books and I love them. Kate continues to surprise me, I sympathised with her throughout the novel. She's torn between the two people she loves the most in the world - her husband and her child. She's also got the weight of the world resting on her shoulders yet everyone else just wants her to stay out of the fight because they think she's weak. It's frustrating to see everyone dismiss Kate and I feel like I connected with her through her helplessness. It was satisfying to see her in the epic final battle and I think she deserved that bittersweet ending. Henry, there is something so appealing about a guy of few words and who is unable to show his emotions. It must be frustrating for Kate but OMG, it's so sexy! He's like the broody, mysterious immortal. EVERYONE'S TYPE! Surprisingly I also really liked Cronus as a character, even though he was portrayed as the antagonist, I feel like all the characters really forced him to play the bad guy! Overall a great cast of characters, I'm going to be sorry to leave them behind!

If you haven't read this series, I sincerely hope you find the time to do it because *I* personally think it's a great trilogy to read and now that all three books are out, you can buy them all and read them one after another! Carter has truly outdone herself with this final instalment, I'm very impressed and I can't wait to see what she has planned for us next! The perfect balance between romance and action, The Goddess Inheritance ended the trilogy on a high note!