Review Time! The sequel to very well received 2011 YA debut, Shatter Me. Tahereh Mafi is back with the highly anticipated sequel, Unravel Me! This is one of my favourite YA dystopians and I think Mafi is a wonderfully talented writer! You can purchase a copy of Unravel Me from The Book Depository | The Nile | Fishpond | Bookworld. Thanks to Allen and Unwin for the review copy! 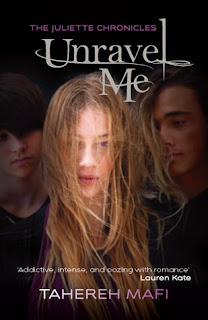 (Goodreads) Our lips touch and I know I'm going to split at the seams. He kisses me softly then strongly like he's lost me and he's found me and I'm slipping away and he's never going to let me go.

Juliette has escaped to Omega Point. A place for people like her - people with gifts - and it is also the headquarters of the rebel resistance.

She's finally free from the Reestablishment, free from their plan to use her as a weapon, and free to love Adam. But Juliette will never be free from her lethal touch. Or from Warner, who wants Juliette more than she ever thought possible.

Haunted by her past, terrified of her future, Juliette knows that in her present, she will have to make some life-changing choices.

Choices that may include choosing between her heart - and Adam's life.


The Short Story? - Unputdownable. I hate Mafi for making this so deliciously brilliant because I am without doubt going to fail midterms since I didn't study however it was totally worth it because Unravel Me was nothing less than perfect. I didn't think the series could get any better after Shatter Me but Mafi has proved me wrong with her beautifully written sequel. A roller coaster of emotions, a romance that has torn me in half and characters that bring out all the feelings, Unravel Me definitely has my approval.

The Long Story? - You have your novels that are brilliant and then you get these novels that just take your breath away. Unravel Me was one of them, literally unputdownable, I read nonstop from nine in the morning to five in the afternoon. Essentially Unravel Me is marketed as a dystopian YA however romance is really the focus of the whole series. I'm not going to lie - in this case, I prefer it that way because the romance is actually well written. It's not just two characters thrown together with some random tagging along for the ride. This is a very detailed and well planned love triangle that will legitimately leave you torn. More than that, there actually IS a plot even if it's a little overshadowed by the beautiful romance. There is a X-Men like element where the characters have superpowers, there's a corrupt government, a wasteland habitat and some rebellion. It's got everything that a great novel needs.

Warner really made the characterisation for me in Unravel Me. Without that beautiful inside into Warner's character, the characterisation would have been pretty meh. I'm not saying that there wasn't development for Juliette and Adam because there was. Juliette newfound confidence was a huge plus for me because I don't like whiny characters that feel sorry for themselves which was Juliette in a nutshell. I'm glad that Kenji have got her to come out of her shell and embrace her powers! Adam was still cute but he was so mopey and angry throughout the novel which wasn't like Adam at all, I mean, I know he has a reason to be mopey but still. The building of Warner's character was really what intrigued me, in Shatter Me we only saw a glimpse of the man he was under the hard exterior and in Unravel Me, it was like "unravelling" the mystery. So beautiful. I love you Warner. < 3

Everyone and their mothers should have a copy of this book because there aren't enough kind words to describe the epicness of this book, it's just amazing! I don't know how Mafi is going to top this book but she better do it and do it fast because I don't think I can wait another year for book #3. Two words - CHAPTER 62. That's enough of a reason to read Unravel Me. Perfection in 480 pages. Bravo Mafi. Well written.

What's it Worth? - Priceless.