Review Time! Venom by Fiona Paul is a 2012 YA Debut that was published by HarperCollins in December of last year! This cover probably threw you off because it's the AUS/NZ cover however this is the very same book as this one - CLICK ME. I've always had a thing for historical YA and I was super excited to dig into Venom, read on to hear about what I think! You can purchase a copy of Venom from Fishpond | The Nile | Booktopia | Bookworld Thanks to HarperCollins for the review copy! 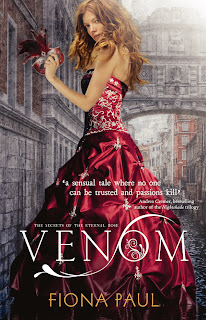 (Goodreads) Cassandra Caravello is part of Venice′s wealthy elite. Her world is one of fabulous gowns, society parties and privilege, yet she longs for something more. While her fiancé is away studying in Paris, she has a chance meeting with an artist called Falco. He is attractive, audacious...and highly unsuitable.

When Cass stumbles upon the body of a murdered woman - with a bloody X carved across her heart - she′s drawn into a dangerous world of secret societies, courtesans and killers. Falco is quick to offer his assistance, but then another body is found and Cass starts receiving death threats... Is Falco more involved than she imagined? And will she be able to stay true to her fiancé, or succumb to her uncontrollable feelings for someone she′s not even sure she can trust?


The Short Story? - Definitely my favourite YA read of 2013 so far! Paul's debut novel is the perfect mix of mystery, thriller and romance. Deliciously dark and seductive, there is nothing more appealing than a romance set in renaissance Venice with a serial killer on the loose! Fantastic characters, good use of a love triangle (for once I approve!) and beautifully written. If you didn't think historical YA could be interesting, you are about to be proved wrong!

The Long Story? - There is nothing more appealing to a girl than a novel set in a romantic city and if it ain't Paris, Venice is definitely the next best thing. I absolutely adored Venom for multiple reason, Firstly the setting was very well done, I love Venice as it is but to make it renaissance Venice is just taking it to a whole new level. Add that to the culturally enriching plot filled with social hierarchy and the blossom of creativity, the whole book just gives off this strangely beautiful and seductive atmosphere. BUT WAIT, there more! Like the plot doesn't sound brilliant already, Paul comes up with the genius idea of throwing in a serial killer going around Venice and carving "x"s on girls chests, not to mention that the killer is on the hunt for our lovely protagonist Cassandra! Filled with mystery, suspense and one very delicious love affair, Venom is definitely a tantalising and spectacular read!

One of the most fascinating aspects of historical fiction is the use of social hierarchy. While we still do have a hierarchy of sorts, it's not as prominent as it was back in the 16th century Venice. I commend Paul on her excellent use of the social hierarchy to create 1) beautiful and realistic characters and 2) an utterly romantic but definitely forbidden romance. Cassandra was a great protagonist, while I'm not much of a fan for the name Cassandra (it's Venice, surely there are more romantic and unique names!), I am a huge fan of her personality. I liked how she didn't fit perfectly into society's expectations, I liked that she believed in love and I liked that she was brave and curious enough to investigate the murders. It was just very easy to connect with Cassandra, to grow to close to her as she grows to understand herself a little better. Falco was very charming and the whole "artist on the streets" aspect totally sold me! I did see the appeal in Falco and I thought his feelings for Cassandra were very real but I'm also very taken by Lucas who is very different from Falco yet charming in his own way. I don't know how Cassandra is going to choose between the two men because I'm having a hard time!

All in all, there isn't much not to like about Venom. Highly entertaining and periodically accurate ( I think, don't beat me with a stick if I'm wrong). Venom definitely has a little more to offer than your usual YA historical fiction. If you like novels about love and murders and Venice, Venom ticks all your checkpoints but also offers you so much more! I highly recommend this debut, Paul has truly outdid herself with this phenomenal start to a brand new series that I'm sure I will continue to love ! I can't wait for the sequel!