Review Time! I've been dragging this review out! Meant to post this on Friday but then the blogging hangover kind of got the better of me so now it's being posted on Monday! Now, Masquerade is the second book in the Blue Bloods series which is like, an International Bestseller. When I read the first book I wasn't all that impressed, it seemed a little average to me but apparently it gets better so I just had to give it another go! 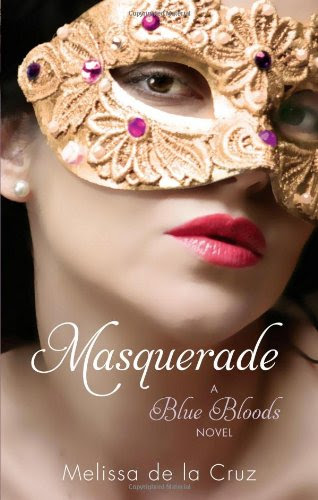 (Goodreads) Schuyler Van Alen wants an explanation for the mysterious deaths of young vampires. With her best friend, Oliver, Schuyler travels to Italy in the hope of finding the one man who can help—her grandfather. Meanwhile, back in New York, preparations are feverishly underway for the Four Hundred Ball, an exclusive gala hosted by the city's wealthy, powerful, and unhuman—a true Blue Blood affair. But it's at the after-party, a masquerade ball thrown by the cunning Mimi Force, that the real danger lurks. Hidden behind the masks is a revelation that will forever change the course of a young vampire's destiny.

The Short Story ? - I have say that it definitely did get better! One thing about the blue bloods is that they are addictive! I couldn't put the book down, it was either read it all or don't read it at all! I stayed up late finishing it! Love the plot, love the originality, love the blue bloods!

The Long Story ? - So I would like to thank-you my bestie for recommending this series to me in the first place. Believe it or not, I used to hate reading paranormal but my bestie persuaded me to read Vampire Academy and then BAM! Paranormal junkee was born....

One thing I love about the series? It's very original. For example, the blue bloods are immortal but they grow old and die just like anyone else BECAUSE they reincarnate. Plus, their blood is blue and they're just as bratty and snobby and bitchy like the girls on gossip girl even if they're a million times older. Maturity does not come with age, it depends on who you are.Which is quite interesting since I LOVE books about social hierarchy ( don't judge me) and designer clothes :P Think of The Blue Bloods as Gossip Girl with Fangs!

Another thing I liked is the lack of Human and Vampire romance! No offence to anyone but it's just getting so old, two years, too old. Even if it's fiction keep it realistic, there a higher percentage of vampire-vampire romance than vampire- human romance. However, I smell a vampire-human romance blooming near the end of this book so *hopefully* I'm wrong!

Romance! This brings me to my next point! Oh, what a tangled web! The book is written in the perspectives of so many characters that while it's not that hard to follow, it's still a struggle to keep up with who loves who and whose going to cheat on who! And let me tell you, it's a temptation not to flip ahead and read the more interesting romances first but then the book wouldn't make sense soooo I restrained myself :) However, I can't complain about a lack of romance. this one is for the romance junkees!

Last but not least, the characterisation is wonderful! Reading Masquerade is like watching soap drama, there is someone to play every role - the nice one, the mean one, the boy whose stuck in the middle, the wealthy, the poor, the weird and the list goes on! Beautiful characterisation truly! Best of all, everyone is beautiful yet they are flawed in one way or another making them more human? Whether it be jealously, insecurity or just the passionate love of teenagers, there is something for us all to relate to!

Overall, I simply can not say enough about how great this book is! This is definitely a series that gets better and better! Masquerade had it's flaws ( like over describing designer clothes when I'm sitting at the edge of my seat waiting to see what comes next) but I have to say I loved it! Schyuler is a great characters and I can't wait to see what happens next. Beautiful, dark and totally awesome! Bookie Approves! Rating 4.5/5