Review Time! Siege and Storm is the sequel to Shadow and Bone by Leigh Bardugo, my favourite book of 2012 (and one of my favourite books of all time). I was beyond excited to read this because as I said, I FREAKING LOVED THE FIRST BOOK. I actually finished this one really close to the release date but I'm lazy and busy so I haven't gotten around to reviewing it till now (my baaaad). You can purchase a copy of Siege and Storm from The Book Depository | Fishpond | Booktopia | Bookworld. Thanks to Hachette for the review copy! 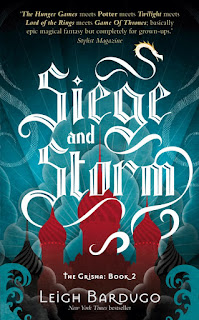 Hunted across the True Sea, haunted by the lives she took on the Fold, Alina must try to make a life with Mal in an unfamiliar land. She finds starting new is not easy while keeping her identity as the Sun Summoner a secret. She can’t outrun her past or her destiny for long.

The Darkling has emerged from the Shadow Fold with a terrifying new power and a dangerous plan that will test the very boundaries of the natural world. With the help of a notorious privateer, Alina returns to the country she abandoned, determined to fight the forces gathering against Ravka. But as her power grows, Alina slips deeper into the Darkling’s game of forbidden magic, and farther away from Mal. Somehow, she will have to choose between her country, her power, and the love she always thought would guide her--or risk losing everything to the oncoming storm.


The Short Story? - Bardugo doesn't fail to impress (and THANK GOD because the only thing worse that a bad sequel is a bad sequel to an amazing debut)! A riveting story that starts off from where Shadow and Bone left off, Alina takes us deeper into the enchanting and mistrusting world of the Grishas. Filled with twists, romance, action and adventure, Siege and Storm is one of those books that has something for everyone to enjoy. Beautifully written, a clever little plot and some incredibly real characters, it's a two thumbs up from me!

The Long Story? - I don't think I've ever read anything more beautiful than the prologue and epilogue of this book, the fairytale-esque narration was so soft and whimsy as opposed to the rest of the book which is a non-stop epic adventure. I don't even know where to begin with this book because it was pretty mind-blowing, although Shadow and Bone was better in my opinion, Siege and Storm had it's moments. The plot was amazing, the story has definitely taken a darker turn since the events of the last book. The stakes are higher, there is a war approaching and time is running out - everything about Siege and Storm, is faster, more dangerous and more thrilling. Not to mention, all the twists and secrets revealed, Bardugo cleverly fooled the readers in the first book and slowly but surely, she reveals the ugly truth underneath. Another turn in the story is the switch in love interests and honestly I'm not too happy, the romance was one of my favourite parts of book 1 yet I couldn't care less about it in Siege and Storm. I'm just glad it didn't take away from the plot (too much). Overall, definitely a thought out plot and very well executed!

The characterisation really compliments the plot ( or is it the other way around?), Alina's development as a protagonist was one of my favourite aspects of this sequel. She's come a long way from the orphan cartographer in book 1, her confidence makes her more appealing and she never fails to surprise me with her courage and leadership. To add to that, she handles pressure really well and she's just a genuinely an incredibly likeable character. Since Alina and Mal are in love now, we see a lot more Mal in this book and well, he's not my favourite character. It's not that he's not likeable but I just dislike him by default because I'm all #TeamDarlina. Mal just too ordinary but someone as extraordinary as Alina, he's too boring when compared to her and tends to be overshadowed therefore -meh. In my bias opinion, even as an evil jerk, the Darkling is still the sexiest and most interesting character (and I still think he should be with Alina - just go to the dark side already!)

Even with my nick-picking and bias opinions regarding certain aspects of the novel (ahem, Mal and Darkling), I still can't find anything major enough to take away from amazing book. I regret nothing and I will join the league of readers waiting impatiently for book 3 because the ending of Siege and Storm is a sure sign that book 3 is going to be NOTHING LESS THEN EPIC (than?). I highly recommend this series, I can rave on for days about the epicness of Bardugo's Grisha trilogy but instead I'm going to leave it and let you decide!

What's it Worth - Break Out the Piggybank