I swore that I was going to only enter the 2011 Debut Challenge and then I entered the Book Bucket List Challenge and now I signing up for the 2011 Aussie YA Challenge. I guess it's only right that I enter this since, I am Aussie :P 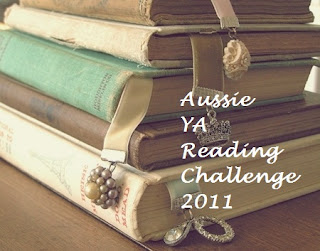 
They can be old or new titles, however no re-reads.


It is open to everyone. You don’t have to be a blogger but you MUST POST A REVIEW. Reviews can be posted anywhere - Blogs, Goodreads, Shelfari or non-bloggers can even do a guest post on a blog like mine.


There will be prizes throughout the year and guest posts and interviews from some awesome Aussie authors. "

Bold - All the ones I own

My fellow readers, I strongly encourage to join this challenge! Believe or not, Aussie YA fiction is actually really good! Sure, the US has some good stuff ( okay fantasic stuff) but we're not bad either! Aussie pride, we're educatd people, we don't all live in the outback ;)

I read some amazing stuff like The Book Thief, A Little Wanting Song and Finnikin of the Rock!