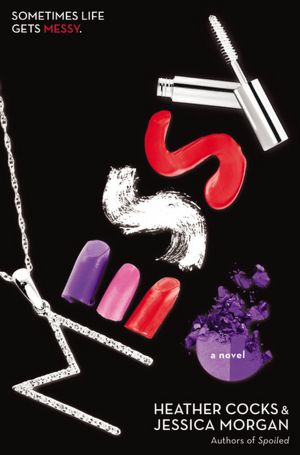 After a rocky start in Spoiled, Brooke Berlin and her newly discovered half sister, Molly Dix, have settled into something like sisterly love, but the drama is far from over.

Now that Brooke's caught a taste of fame and her movie star father's attention, she wants to launch a blog that will position her as the ultimate Hollywood insider. But between schoolwork, party-planning committee meetings, and spa treatments, she hardly has the time to write it herself...

Enter Max McCormack, an aspiring author with a terrible after-school job pushing faux meat on the macrobiotic masses of La-La Land. Max reluctantly agrees to play Brooke's ghost-blogger for an impressive salary, and the site takes off, but how long can their lie last? In person, Brooke can't live up to the intellectual wit of openbrooke.com, and Max soon begins to resent hiding her genius behind a bandage dress-wearing blonde. Can the girls work together to stay on top, or will the truth come out and ruin everything they've built?

The Short Story? - Get ready for round two of absolute Hollywood hilarity! Cocks and Morgan have done it again, bringing the best of fashion, fame and hollywood glamour together in an epic sequel to Spoiled! Well narrated, fantastic plot and characters that make you laugh - ALOT. Very funny, very cute and cliched in the good way before cliched become a bad thing!

The Long Story? - Messy is perfect for any of you US bloggers looking for a beach read. It's hilarious and it's a novel that isn't meant to be taken seriously.I would call it more of a companion novel than a sequel because while the same characters appear, the plot is definitely continuous. The whole book is a little like a mockery of fame, glamour and Hollywood. It's over the top, exaggerating scandals and fashion passés and the drama queens personalities we associate with famous people. I really enjoyed the plot of the novel, I liked how the authors have incorporated a little of themselves ( the blogging) into the novel. It's very well narrated in third person but that also makes it a little harder to connect with the characters and really dig into the novel. The plot definitely was a win for me.

The characterisation was well-done. We see a lot of character development that wasn't seen in Spoiled. Brooke is definitely a lot nicer and more likeable. She's still got her melodramatic personality but it's Hollywood unless it's over the top right? I liked how Brooke also had a lot of insecurities which made it easier to relate to her. Definitely a very "fun" character. Max, you have to love Max. She is like the ultimate juxtaposition to what you would associate with Hollywood and she's hilarious. She's kind of got the whole typical teenager personalities mixed with a semi-goth wardrobe and a very funny sense of humour. The novel is told in alternative perspectives of Max and Brooke and I think the two main characters complimented each other beautifully.

In a nutshell, Messy is definitely one everyone should check out! I loved every moment of it from the white collar reference to the dancing queen remix. Brooke and Max are fantastic characters that will laugh out loud. Well written, great plot and in case you didn't get the memo already - COMPLETELY HILARIOUS. Two thumbs up for Messy!