Review Time! It’s been a while since I’ve posted a review, I’ve read heaps but because it’s the first week of school, I haven’t had to time to actually write the review! Spoiled is a 2011 YA Debut written by internationally recognized celebrity bloggers - Heather Cocks and Jessica Morgan @ Go Fug Yourself Thanks to Allen and Unwin for the ARC! 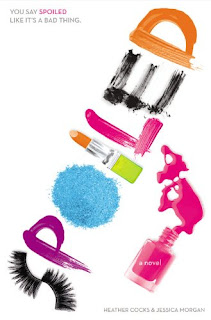 (Goodreads) 16-year-old Molly Dix loves her ordinary life in suburban Indiana, so when her single mother passes away, she is shocked to discover that her biological father is Brick Berlin, world famous movie star and red carpet regular.
Equally intrigued and terrified by her Hollywood lineage, Molly moves to Southern California and plunges head-first into the deep end of Beverly Hills celebrity life. Just as Molly thinks her new life and family couldn't get any stranger, she meets Brooke Berlin, her gorgeous and spoiled half-sister whom welcomes Molly to la-la land with a healthy dose of passive-aggressive "sisterly love."
The Short Story? – A funny and glamorous debut that gives evil stepsister a whole new Hollywood outlook! Spoiled is a comfortable novel that will bring you laughter and exaggerated fashion showdowns from cover to cover! Cocks and Morgan has written a YA-pleaser filled with celebrities, limitless credit cards, designer shoes and frenemies!

The Long Story? – I adored this novel, it wasn’t love but it was affection. Spoiled is a typically “clichéd” YA novel, you could even call it satire. The novel is mocking the Hollywood life and the spoiled, trust-fund babes! There were goods and bads about the novel – mainly goods. I loved the endless drama, it was one showdown in Louboutins after another! What I didn’t like so much was the childish quality of the characters but then again – they’re spoiled right? Overall, it’s a very comfortable read that would bring you laughter from start to finish! Spoiled gives wicked stepsister (or in this case half-sister) a whole new meaning!

The characterization fitted with the plot and title. Initially I wasn’t a huge fan of Brooke, so she is MEANT to be spoiled but I wasn’t a big fan of her bratty attitude. As the novel progressed, I got to know her better and suddenly her attitude made sense, Spoiled actually covers a lot of heavy topics and issues that many teens all around the world face everyday. Neglect, loneliness, fear, insecurity and a few others. Brooke also undergoes a change of attitude towards the end of the novel and that really was a huge highlight for me! Molly was a sweetheart from the beginning, she’s been throughout a lot and while Brooke wasn’t the nicest person to her in the beginning, they eventually worked past the evil stepsister syndrome! An excellent novel where character development comes through very clearly!

Spoiled is a novel to be enjoyed by teen readers and reader who are forever eighteen. If you love celebrities, gossip, designer shoes and drama, this one is for you! Cocks and Morgan has written a funny debut about the not-so-glamorous life of the daughters of A-list. Good character development, fantastic plot and brilliant overall presentation of a novel. Spoiled is a YA- pleaser that will leave you with a feeling utterly entertained!

What’s its Worth? – Squeeze into the Budget/ Hand over the Paycheck