Debut of the Month - Carly Anne West ( The Murmurings) Anne West is a freelance writer with an MFA in English and Writing from Mills College. She lives with her husband and son in Seattle, Washington. Visit her at carlyannewest.com.

Dream Debutante Dress -  You know, I lived in Nashville for three years. You'd think that in that amount of time, I would have had some sort of debutante moment. Alas, I worked instead at the local newspaper selling help wanted ads during a recession. So let's make up for that obvious gap in my life by designing a slightly absurd dress. I'm thinking it has to be very 60s-era. I don't know why it has to be, but it does. Green, with white polka dots. I actually own a little clutch with that same design, and to have an entire dress of it would be magical. And, you know, I already own the purse, so accessorizing just became much easier. And for reasons unknown to even me, I want tulle in the skirt. White tulle. It should rustle when I walk. It should scratch my legs a little.


I've attached a picture of the style. I'd just swap in my own design if given the choice. :-) Very, very Mad Men. 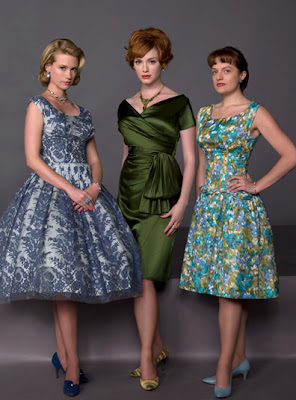 This feels like a great opportunity for a Top Ten List of "No, I swear, this really happened" Moments:

10.) When I was little, my mom was reading Stephen King's IT. I had no idea what the book was about and had never heard the story. But one night, I had a dream about a very specific scene in the book. I told my mom about it the next morning, and she gave me a funny look but didn't say much. For the next two nights, I had horrible nightmares of a similar variety, along the same story line. I told my mom each night, and by the third night, she told me not to worry, that I wouldn't have those dreams anymore. Later on, she shared with me that I'd actually been dreaming about what she had read the night before. So she stopped reading the book, and sure enough, I stopped having the nightmares. No, I swear, it really happened!

9.) In high school, for reasons far too complex to share in a post this short, I spent an entire day dressed as a shark. No, I swear, it really happened!

8.) I once almost fainted on BART (it's sort of like a subway in San Francisco), and nobody asked me if I needed help! They just watched me slide down the wall and hit the floor. Yeah, it happened just like that.

6.) When I was learning how to drive, I drove my parents' car through our garage door. Seriously, that happened.

5.) When I was in college, I conducted a sociological experiment for extra credit that involved me standing in a crowded elevator, yelling "ding!" as we hit every floor, and noting people's reactions to my behavior. Yup, that happened.

4.) Just two weeks ago, I had an incredibly vivid dream about donuts (don't laugh ... you know you want to have a dream about donuts, too). The next morning, my husband bought two dozen donuts for his coworkers, just because it sounded good to him for some reason (I'd told him nothing about my dream). Yes, it totally happened!

3.) It would get so hot in Phoenix (where I grew up) that during the summer, if I stood too long in one spot on the street and I was wearing cheap shoes, they would begin to melt to the asphalt. Yes ma'am, that happened.

2.) Did you know it's possible to dislocate your pinky toe? It is. Because I did that.

1.) I got into the writing program at Mills College even though I was number seven on the waiting list. Yes! It happened. Dreams really do come true, kids!


Bookie's Note: Carly, you are probably one of the most dedicated debutantes I've had on the blog. To the point of actually imagining your dream debutante dress? That's brilliant! Carly I think you're some kind of physic or something along the lines. Two incidents of creepy dreaming? Coincidence? I think not! I can't believe your shoes actually melted and here I thought I had it bad! So hot on the coast in Summers! Thank-you for sharing all this with us Carly, you've certainly had a very interesting list of facts! :P Haha

Remember to come back tomorrow to see the second half of Carly's feature and for a giveaway! :)