Debut of the Month - All About Pretty Girl-13 +Giveaway 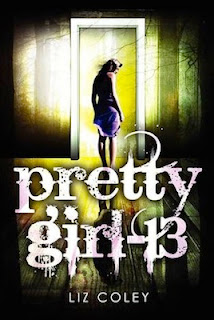 Angie Chapman was thirteen years old when she ventured into the woods alone on a Girl Scouts camping trip. Now she's returned home…only to find that it's three years later and she's sixteen-or at least that's what everyone tells her.

What happened to the past three years of her life?

But there are people who do — people who could tell Angie every detail of her forgotten time, if only they weren't locked inside her mind. With a tremendous amount of courage, Angie embarks on a journey to discover the fragments of her personality, otherwise known as her "alters." As she unearths more and more about her past, she discovers a terrifying secret and must decide: When you remember things you wish you could forget, do you destroy the parts of yourself that are responsible?

Angie’s alters told me their individual stories on a seven-hour car ride from Washington DC through the mountains of West Virginia heading home to Ohio in late January, 2009. I didn’t write the first word of the book until November 1, 2009. That’s how vividly they stuck with me.

Pretty Girl-13 was my Nanowrimo 2009 novel. When I started writing, I had no idea how it would end. In fact, I thought all the alters would share the same fate. The characters took me on their journey.

My first trusted readers told me my initial shot at the ending was lacking drama after all that had gone before. They were right. So then I wrote a real Act III with much more conflict and climax. I suspect that people who haven’t researched DID aren’t as familiar with the intense symbolic level on which the alters interact, but the metaphors really spoke to me.

I’d actually like someone with DID to review the book. Any takers?

I wrote all of the novel sitting on the floor in front of a gas fire with my laptop up on a footstool. Maybe that’s why the fire motif is so prominent in the story. If I had to write an English paper about the novel, I think fire would be my topic.

Many people characterize Pretty Girl-13 as an issue book about Dissociative Identity Disorder or about abuse. To me, at heart it is a story about memory and identity. DID is the vehicle that carries the story.

Liz is giving away a personalised copy of Pretty Girl - 13!