Cynthia Leitich Smith is the New York Times and Publishers Weekly best-selling author of ETERNAL, TANTALIZE, and BLESSED, all Gothic fantasies from Candlewick Press. She also has written several YA short stories as well as books for younger readers.


TANTALIZE was a Borders Original Voices selection, honored at the 2007 National Book Festival, and The Horn Book called it "an intoxicating romantic thriller." A graphic novel adaptation of TANTALIZE is in the works.
ETERNAL was a YALSA Teens Top Ten nominee, featured at the Texas Book Festival, and Publishers Weekly said, ".readers should be hooked by this fully formed world, up through the action-packed finale." It debuted at #5 on the New York Times best-seller list and #13 on the Publishers Weekly best-seller list.

BLESSED crossed over the two casts. The Horn Book cheered: "Quincie has a zest for life that shines through as she balances supernatural duties with schoolwork and running her family restaurant, the vampire-themed Sanguini's. Romance blossoms, too, as she and her beloved werewolf, Kieren, prove their devotion to each other under deadly duress. A hearty meal for the thinking vampire reader." And Kirkus Reviews said the novel was "wild and ultimately fascinating.the pages fairly smolder in describing their [Quincie and Kieren] attraction to one another."

The glory goes to the hero, the scorn to the villain. The protagonist and (sometimes) antagonist drive the plot.

How do we get to know those characters? Their setting, sure! Background, absolutely!

But perhaps nothing brings the main characters to life more than the second stringers, the supporting actors in their lives.

That’s definitely true of my Gothic fantasy series—Tantalize, Eternal, and most recently Blessed. The casts of those first two novels crossover in the third, and re-introducing them was perhaps the most entertaining part of writing the new novel.

I’m talking about more than walk-ons or background folks. But rather the people or monsters that make a specific difference, even though they’re just beyond the spotlight. They’re characters fleshed out enough to almost fuel stories of their own.

Blessed features a large cast—with characters returning from the previous titles and some new ones too. I’m going to talk just briefly about a few of my favorites.

The twins—Freddy and Harrison. One human, the other a neophyte vampire. Both were raised as children of human servants of the undead, the latest in a long line from that chilling tradition.

Freddy is all style and panache, a former event planner, the perfect choice to step in as Sanguini’s make-believe vampire chef for the midnight toast. After so many years lingering on the border of the underworld, he’s eager to stand with the heroes and make a difference for good.

Harrison is the reason Freddy didn’t escape the shadows sooner. He longed for undeath, coveted it, and even betrayed his master to drink the blood of a lesser eternal. He’s wry, sarcastic and pessimistic, shockingly self-interested. But how much of it is posturing?

The two play competing honorary uncles of sorts to Quincie, and both are a huge improvement over her actual uncle, Davidson from Tantalize.

Sabine and Philippe. She’s the queen of the damned, and he’s her loyal consort.

Sabine’s goal is to kill more people than heart disease, and yet, if it’s in her best interests, she’ll fight with the good guys. This vampire queen has a tragic past, though. As a one-time French aristocrat, she chose undeath to escape the guillotine.

Philippe’s story is more murky, but he’s courteous and elegant, the consummate host. We do know that he was badly scarred in a fire and his cane emits an electric charge.

While both of these baddies fear the Big Boss, that doesn’t mean they’ll bow to Quincie, even if she is traveling with the guardian angel Zachary at her side.

Nora, the new chef, becomes the surrogate grandparent that Quincie lost when Vaggio was killed in Tantalize.

And then there’s the Morales family. Quincie gets to know them in a whole new way when Meara and Roberto become her legal guardians.

Like all of us, Quincie P. Morris is defined large in part by the characters in her life.

Thanks Cynthia! Wondeful post, I can't wait to read Blessed, this post has definitely given me more of an insight on the novel! I LOVED Tantalize! 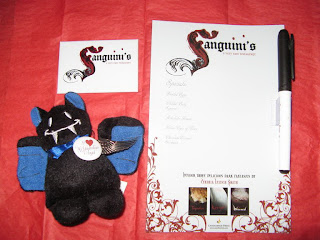 Please leave a comment below with your email address to entered. +2 for followers! Please add it up for me!