EVERY BREATH Blog Tour - Q And A with Ellie Marney

Hey guys! As part of Ellie Marney Blog Tour for her latest YA novel, Every Breath (Allen and Unwin), she's stopping over at Badass Bookie for a quick Q and A today.

Early Bird or Night Owl?
I used to be a night owl, but in the last few years I’ve had to reprogram myself – nights were doing me in, and since my youngest son started sleeping well in the mornings, I’m an early bird.  Five am is pretty damn early.

Coffee or Tea?
Tea – by the gallon.  STRONG tea, like stand-your-spoon-in-it strong, with condensed milk.

Dog-Ear or Bookmark?
How embarrassing…dog-ear  *blushes*

Song That's Currently Playing (out loud or in your head)?
Riptide by Vance Joy – we are ALL singing it.  It’s almost getting annoying.

Book that should be turned into a movie?
The Name of the Star by Maureen Johnson

Book that everyone else has read but me?
Fifty Shades of Grey

If I could collect one thing it would be...
Apart from books?  Then…teapots.  I would need a whole lot more shelves.

If I was a vegetable I would be ...
Leek.  An eminently useful and flavoursome vegetable.


Do people still watch that?

1) Can you describe Every Breath in three words?

2) Every Breath has been marketed as a kind of teenage Sherlock Holmes - what can readers expect (will there be a body count)?

Indeed there will be! Actually, the body count is quite high for YA crime – maybe not Barry-Lyga-high, but getting up there.  Readers can expect to see blood spilt, because it’s a murder mystery (one reviewer described Every Breath as ‘definitely not crime-lite’, which I loved!), but to offset that there’s the power of friendship and the promise of love…all amongst the gritty backstreets of Melbourne!

3) Would you say  Every Breath is more Benedict Cumberbatch Sherlock or Robert Downey Jr. Sherlock?

I’m going for Cumberbatch, because I’m a bit of a classicist.  You could add a generous dollop of Johnny Lee Miller as well, but actually the character of James Mycroft is not really a template of Sherlock as we know him.  Mycroft is more…eccentrically himself.

I confess I watched a lot of s1 and s2 Misfits while I was writing Every Breath, so it’s kind of Melbourne Sherlock, Misfits-style J

4) Is there one character that you can relate most to?

Well, Rachel is from the country – I’m from the country; Rachel wears flannel shirts – I wear flannel shirts; Rachel can fix a water pump and climb onto the roof of her house….er, no, there the similarities end.  I’m an awkward DIY-er, and I get awful vertigo, so no pump-fixing or roof-climbing for me.

Actually, the character I found the easiest and most natural to write by far was Rachel’s brother, Mike.  He’s straight-forward and optimistic, a real country salt-of-the earth guy – I think he’s adorable!

5) Can you tell us a little about your writing process?

At the moment it’s a shambles – I never realised that the release of Every Breath would make me so busy!  Usually I get up at 5am, before anyone else in the house wakes up, and go out to our little shed-slash-office and I write for about two hours, until I have to go in and get everyone ready for school.  It is, um, very early, yes.  Sadly I’ve had to use this time lately for answering emails and things – but the writing time is coming back soon, very soon!  (If it doesn’t, my head will explode)

For me, the first part of the process is always about this massive deluge of unedited writing – a bit like vomiting out as many words onto the page as I can (to be completely gross about it).  Then once I have this huge swollen unwieldy mess of a book, I put it away to spend some time thinking about it, before going back and shaping it and wrangling it into something publishable.  The writing part feels good – almost cathartic – but it’s the crafting part that I enjoy the most: seeing something bright and sparkly come out of chaos.

6) If Every Breath was turned into a movie, who would play who?

Robert Sheehan (when he wasn’t gallivanting around the world in the company of Shadowhunters) would play Mycroft, for sure – see Misfits, above. He was totally the guy  had in mind when I was picturing Mycroft while writing – except now Lisa White’s incredible cover has brought Mycroft to life so beautifully, so my mind does stray to that guy (who are you? You have awesome cheekbones!) when writing.

Rachel is harder.  I imagine her as having the same kind of no-nonsense grit as Jennifer Lawrence - before the gloss of The Hunger Games, she played this determined, dirt-poor character in an amazing film called Winter’s Bone.  So, yeah, more like that.  But I don’t imagine Rachel looking like Jennifer Lawrence.  More like…Ellen Page in Whip It, I think.  But with blonder hair.  And more flannel.  And Blundstones.

Robert and Ellen, if you really want to make the movie, call me! Rachel Watts is an unwilling new arrival to Melbourne from the country. James Mycroft is her neighbour, an intriguingly troubled seventeen-year-old genius with a passion for forensics. Despite her misgivings, Rachel finds herself unable to resist Mycroft when he wants her help investigating a murder. And when Watts and Mycroft follow a trail to the cold-blooded killer, they find themselves in the lion's den - literally.

A night at the zoo will never have quite the same meaning again... 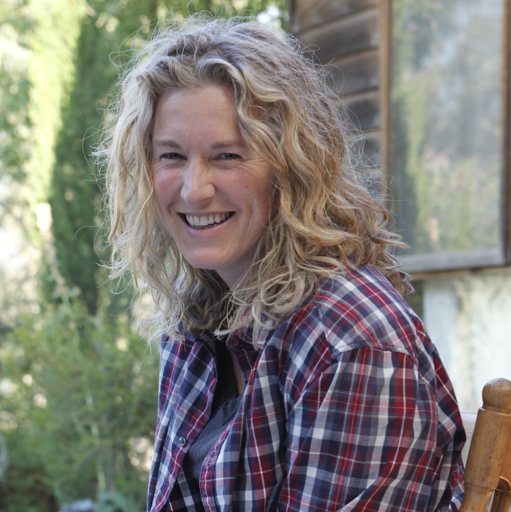 Ellie Marney was born in Brisbane, and has lived in Indonesia,Singapore and India. Now she writes, teaches, talks about kid’s literature at libraries and schools, and gardens when she can, while living in a country idyll (actually a very messy wooden house on ten acres with a dog and lots of chickens) near Castlemaine, in north-central Victoria. Her partner and four sons still love her, even though she often forgets things and lets the housework go.

Ellie’s short stories for adults have won awards and been published in various anthologies. Every Breath is her first novel for young adults.