Review Time! Dance of Shadows is the debut novel of YA author, Yelena Black! I originally had this review planned for February BUT before I could finish the book, someone stole my copy of the book from the common room - HOW RUDE. However Cass @ Words on Paper was nice enough to send me her copy! You can purchase a copy of Dance of Shadows from Fishpond | The Book Depository | The Nile | Bookworld. Thanks to Bloomsbury for the review copy! 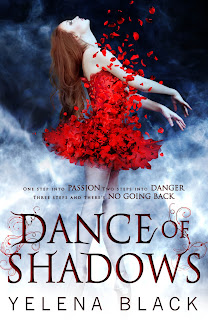 (Goodreads) Vanessa doesn’t believe that her sister is a runaway. She wouldn’t leave her family behind without saying a word. The only way Vanessa can discover the truth behind her mysterious disappearance is to follow in Margaret’s footsteps, but to do so she risks her sanity and maybe even her life . . .

Vanessa Adler is one of the talented few to get a place at the acclaimed New York Ballet Academy. Between backbreaking rehearsals for the school’s production of The Firebird she desperately tries to find out what happened to her sister before she vanished. There are rumors that the pressure of performing the lead role, the same role Vanessa is now rehearsing for, drove her mad. Other girls have gone missing too. Can the role be cursed? Vanessa’s new relationship with leading-man Zep only seems to complicate things further. What is he hiding from her and can she really trust him?


The Short Story? - Dark, seductive and exciting, Dance of Shadows is an refreshingly original debut. A great combination of dance and the supernatural, Black has written a beautiful yet eery novel of mystery, suspense and the unexpected. Captivating plot and well written, my only problem with the novel was some of the characterisation. Overall, an enticing and edgy debut that taunts readers to devour the story from cover to cover.

The Long Story? - Even though I used to dance, I've never been all that fascinated with dance novels. They're a little too girly for me and I honestly don't really understand the appeal of ballet (only ever did Jazz and Tap). So going into this novel I was a little hesitant however I was surprised by how much I enjoyed it. My biggest concern was that the dance and supernatural element would over power an actual plot. I didn't really want a novel about some girl who falls in love with some dancer dude who turns out to be a vampire. LUCKY ENOUGH, that wasn't the plot. It's a really subtle supernatural element that carries through the novel. It's a mystery and we don't find out what's really happening until the very end. All we know is that girls are disappearing and something funky is going on with the choreographer. It's the kind novel that takes a lot of restraint not to flip ahead because the suspense will absolutely KILL you! Brilliant plot, I can't fault because I love supernatural elements and I love mysteries!

Characterisation was really the problem area for me, I didn't find myself caring all that much for Vanessa. As a protagonist, she's quite distant from her readers. I don't think her character was developed enough and what I did see of her, she was annoying and insecure and whiney and kinda depressing. I know a lot of other reviewers really enjoyed her character but we just didn't click. It's probably just a personal thing because I kind of the opposite of Vanessa but it did let down the novel a little for me. There is a guy involved named Zep although I don't really understand their "love", I don't mind instant love when it done well but in this case, I didn't think any romance was necessary. I would have been happy with a straight up YA novel without the boy. I did like Vanessa's friends though, they were portrayed really well. Fun and caring and loyal, they're the kind people I would be friends with. Overall, the characterisation definitely wasn't a forte for me but it wasn't horrible either.

Dance of Shadows is one of those debuts that everyone is either going to love or hate depending on how much you're willing to forgive and look the other way. I really enjoyed it, the characterisation was a little bit of a let down but not so much that it ruined the book for me. The plot was fantastic and the writing was really engaging, it's a pretty decent debut and I'm definitely going to follow through with the series because I'm sure there is going to be character growth in the books to come!