Hey Everyone! We're spicing things up this week by starting the week with an interview and a giveaway! Heather Cocks and Jessica Morgan are the authors of Spoiled and the recently released sequel Messy! These two fashionistas run the Celebrity blog - Go Fug Yourself. It's a honour to have them on the blog so without further ado .... 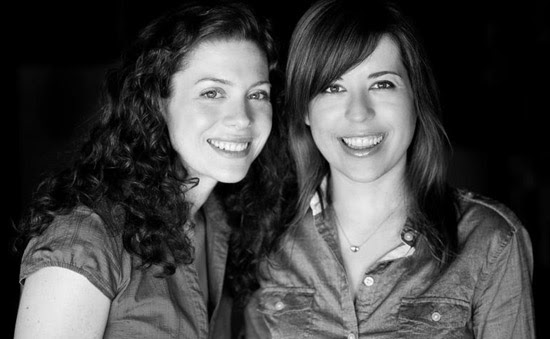 HEATHER: Smart, fun, and well-dressed. I mean, look at that cover. Liz did such a good job again.

2) How did you come up with the storyline for Messy?

JESSICA: We started talking about where we wanted to take Brooke and Molly and their friends next. Brooke definitely would want to go to the next level, professionally, and we realized it was funnier if she did that with Max. Molly would be sort of long-suffering and even-keeled with Brooke (which is good, given that they live together!), but Max and Brooke together was an Odd Couple we couldn't resist.

HEATHER: We also realized that sometimes the fish-out-of-water story isn't as compelling once the fish is back IN the water. It might feel like piling on to keep shoveling misery Molly's way, so after Spoiled, when we left her in a good emotional place, we decided maybe it'd be more fun for us to explore a different kind of outsider. Max is that outsider. She may be in the rich world, but she is not of it -- she holds herself away from it, aggressively, for various psychological and emotional reasons. So what happens when a self-made outsider is thrust into the middle of things? We figured we'd enjoy telling that story.

3) What made you guys decide to write YA fiction?

JESSICA: Well, we are big READERS of YA fiction, and we always wanted to write it. It felt like a natural extension of the kind of writing we already do. A lot of what we write on GFY is kind of speculative to begin with, so fiction felt like the natural next step.

HEATHER: And it's definitely the right spirit for our personalities, and sensibilities. Plus, young adults are smart. The genre isn't about writing young stories; it's about writing stories about young people. So we wanted to write a book that we would've liked at that age, in part because we realized there doesn't HAVE to be a difference between a book you like at that age and a book you like at our current age.

JESSICA: I relate to Max in a lot of ways, but I also actually really relate to Brooke. She's doesn't suffer fools -- at all.  She doesn't spend a lot of time moping. And she's always got a plan. (I also appreciate her shoe wardrobe.)

HEATHER: Let's see. I WANT to relate to Mavis Moore the most, because she does her own thing and doesn't care whether anyone else thinks it's weird. That's strength right there. But I'm not like that, if I'm being honest, so although I admire her I can't say I relate directly. I love Max -- we toned it down in this book for reasons I can't remember, but her little anagramming tic from Spoiled is totally me. And I love Arugula because she loves words. But in general, probably Molly. I moved a lot growing up, and I'm really familiar with not knowing quite where to start when it comes to being in a new social universe, and trying to figure out whether you deal with the devil in order to feel like you have a friend.

JESSICA: A lot of the names just came about through regular old brain-storming. Molly's last name, "Dix," is obviously a wink to Heather's last name being "Cocks" -- a PG-13 wink. And Brick Berlin is somewhat inspired by the former college QB for the University of Miami, Brock Berlin. We always said Brock Berlin was the perfect movie star name -- we said it every time we watched a game he played in. So that was a wink to our college football viewing habits. And, of course, Brooke's friend Jennifer Parker is named after Marty McFly's girlfriend in Back to the Future. Seriously. We love that movie.

HEATHER: We also wanted Arugula to be named after something edible. We knew we wanted to make fun of dopey Hollywood names, but we also loved the idea that a girl named after lettuce would also be the smartest person in the book. We did realize, though, that we have a tendency toward "-y" names: Molly, Teddy, Brady, Danny, Kelly...

JESSICA: Definitely! We're planning our next book right now, and I think it's going to be set in the universe next door -- well, literally, it will still be THIS universe, but not in the Berlin orbit. Although I suspect the Berlins are alive and well in the world of the new book.

HEATHER: I would be surprised if any new book didn't mention a Brick Berlin blockbuster. But yeah, we're avidly and excitedly planning something new.


JESSICA: This is one of my favorite questions! I always thought that Ashley Rickards, who is on MTV's Awkward, would be great as Max. And I always see someone like Ashley Benson, who's currently on Pretty Little Liars, as Brooke.

HEATHER: Let's see if we can keep up the Ashley thing. Um... Ashley Judd as Molly's mom Laurel in flashbacks, Ashley Tisdale as Jennifer Parker,  Ashley Olsen as Kelly Berlin (in old flashbacks)... um... Ashley Greene as Brooke's yoga teacher... the girl who played Ashley on ABC Family's Greek as Arugula, and... yeah, I'm out. But we did pretty well there! That's a lot of Ashleys.

Hahahahahaha! Jessica's answer to Q5... :D I can't wait to see what you girls have planned next but without a doubt it would be every bit as awesome as Messy! WHICH is why the awesome people at Allen and Unwin have offered (5) copies of Messy to you readers! Unfortunately this giveaway is open to AUSTRALIAN residents ONLY. Normally I would pitch in and try make it international but I'm too broke at the moment :'( Sorry guys!